Clothing plays an important role in building up your personality while a bad hairstyle can ruin everything. So, it is very necessary that you opt for a hairstyle in which you can look attractive all the time. Not everyone has got voluminous and long hairs and if you are the lucky one, then you can go for the Samurai hairstyles. Yes! This is a hairstyle which will look perfect on every man who wants to look cool and decent at the same time.

What is Samurai hairstyle and how you can carry it?

You must have heard of famous Samurai hairstyles which are quite famous these days. Mostly, it is considered that samurai hairstyles look like man bun. When the long hairs are tied at the back of the head, then it is the original look but it is totally different from the ponytail. For the modern look, you can choose from the full and semi-bun. It was originally a warrior haircut but now it has become a status symbol. To get this hairstyle, you need a longer length of hairs and then by tying the hairs in a bun can result in this hairstyle. Growing beard can be a nice option as it can give you a manly look. One can get both casual and formal look with this hairstyle according to the clothes. You can carry this hairstyle with formal suits and one can also wear funky t-shirts and jackets with this look. The only thing you need to remember is that you choose the professional hairstylist to get this amazing hairstyle. Below are some of the best Samurai Hairstyles for Men to Look Cool and Decent.

Samurai hairstyles for men often look modern and trendy, and this is one of them that does. It features an undercut and long hair on top that’s naturally curly and pulled into a bun. Some of the hair is let fall free down the back of the head. 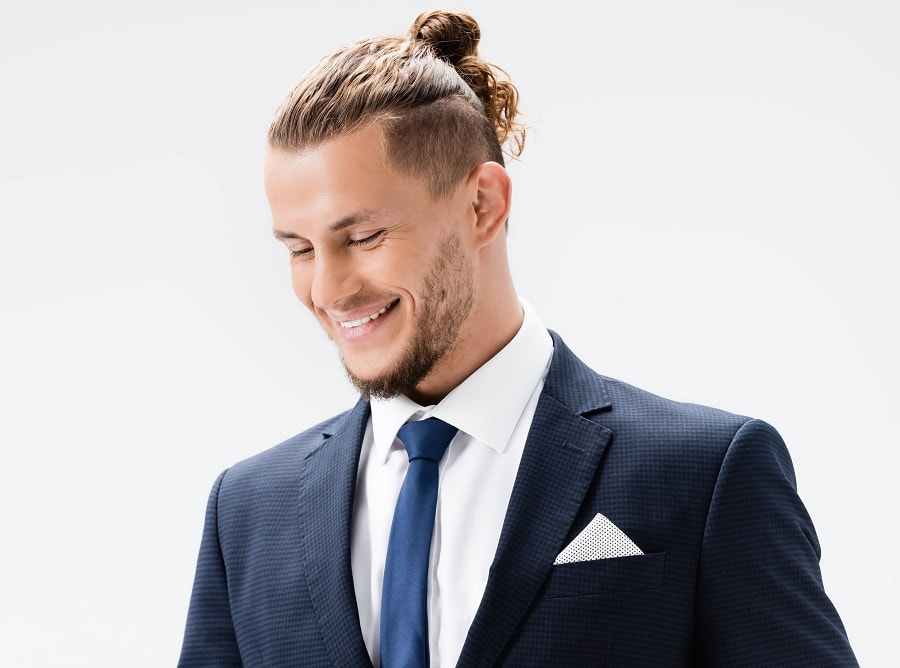 This style is a little more casual than the one above, and the hair is casually thrown up into a bun at the top of the head. It’s a style you’ll often see on Samurais who are engaged in combat and don’t have time to worry about their hair. 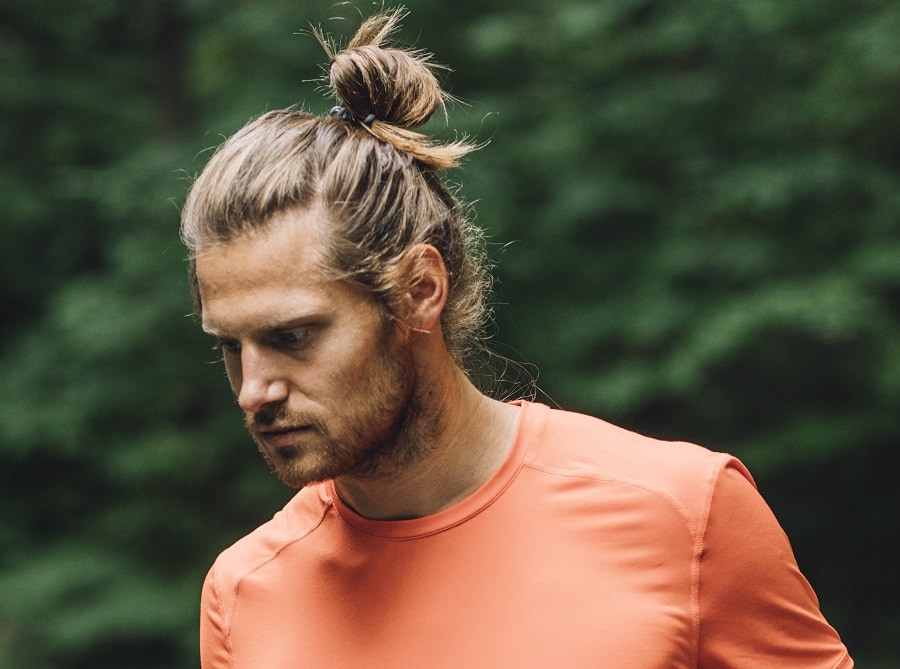 This is one of the more subtle Samurai hairstyles for men. The hair is thick on the sides, but it’s very short and only mid-ear length. The top is slightly longer but the bun forming the Samurai style is very small.

Here’s a style that’s slightly less of a classic Samurai look. The bun is lower down on the head and it’s large and knotted with no hair sticking out of it. It’s a slightly neater and sleeker version of the look. 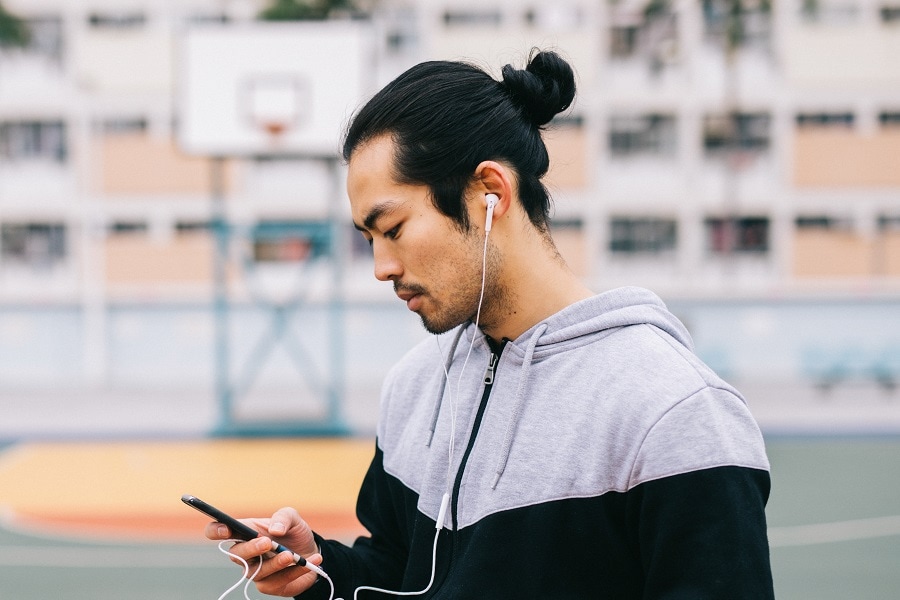 Undercuts are common in Samurai hairstyles for men, and you can see another example of one here. The hair is closely shaved to the head with only the hair on top remaining. The hair on top is long and piled into a bun with an interesting shape to it. 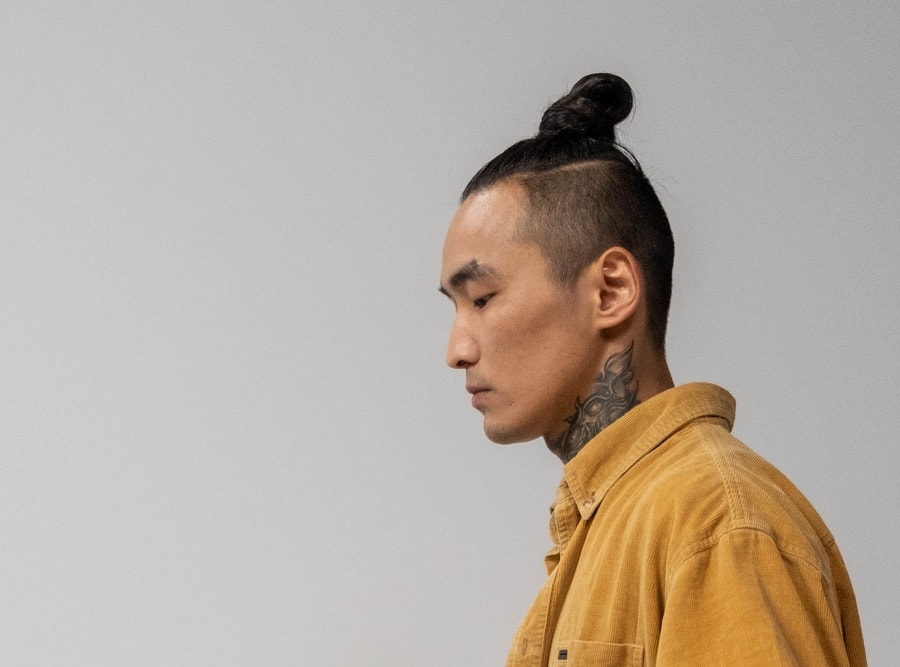 This messy bun style is a great look to emulate a busy Samurai style. The hair is pulled back loosely into a messy bun, and some strands of hair fall free of the bun to add some dynamic aspects to the hairstyle. 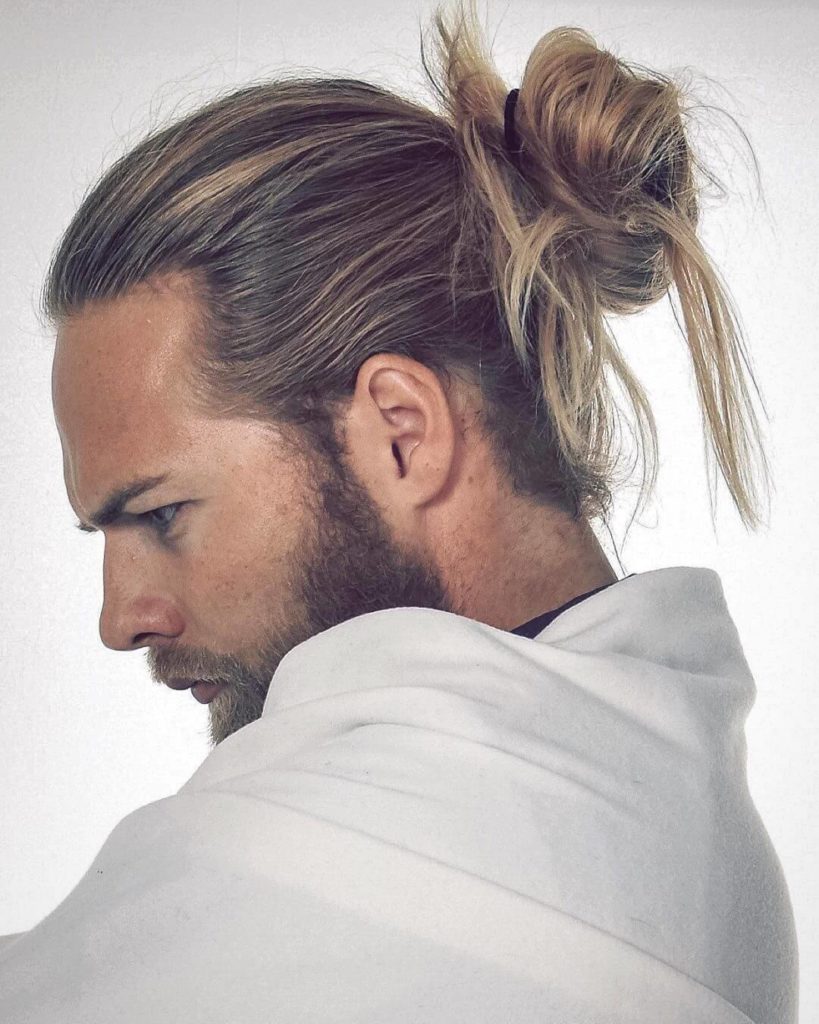 Here’s another example of an undercut Samurai style. The hair on top is very long, and the bun is so large that it’s doubled up and in the bun style on both sides of the band that’s tying it. There’s a hard parting shaved between the undercut sides and the top of the hair. 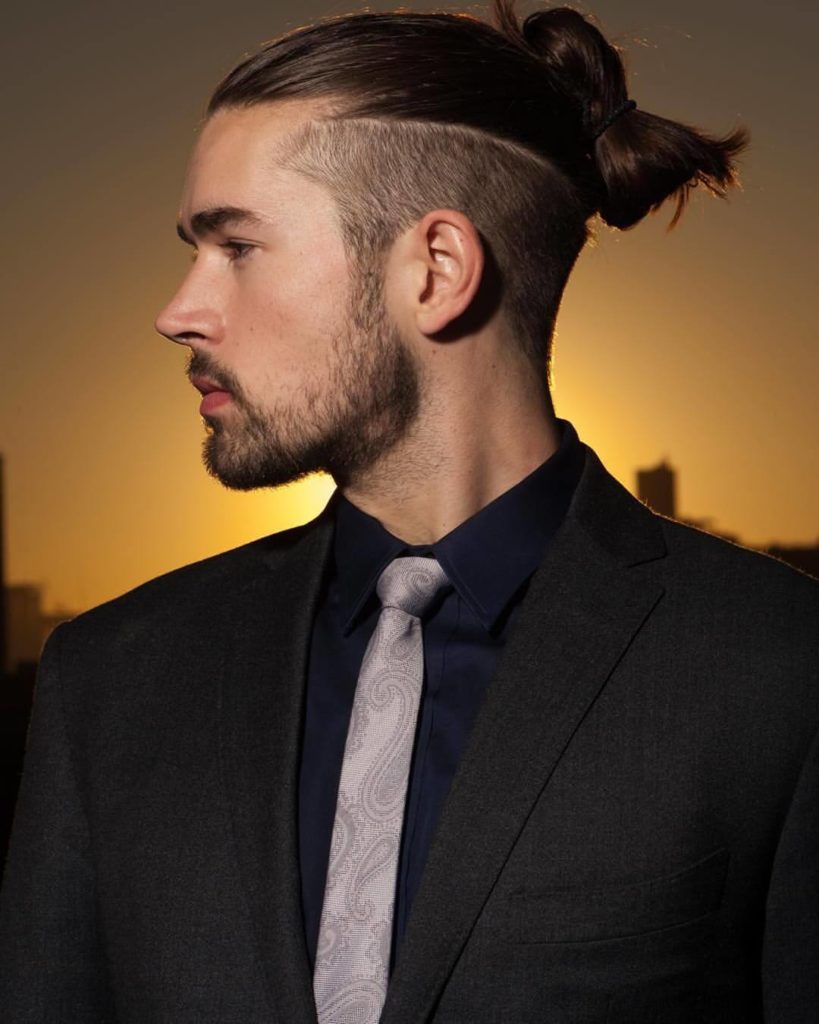 Not all Samurai hairstyles for men have a lot of volume, but this one does. The hair is very thick and long and tied in a small bun high up on the back of the head. It’s a casual version of the style, and it’s very loose, too. 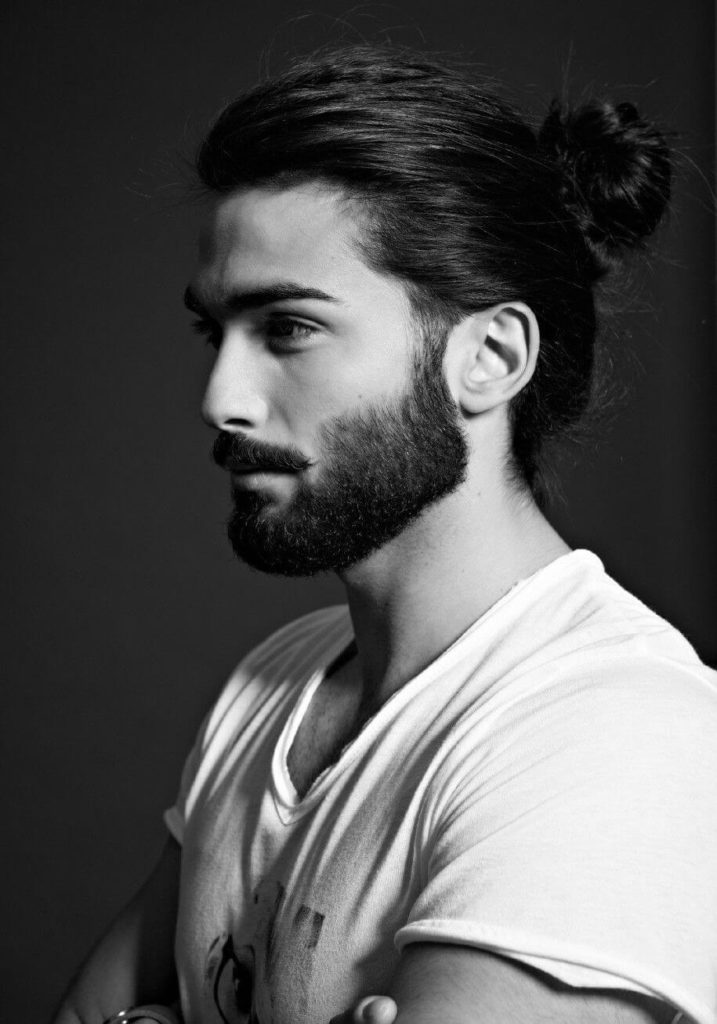 This undercut is the first one to feature the sides and back of the head shaved right down to the skin. The hair on top is quite short and pulled back into a very small ponytail rather than a bun. 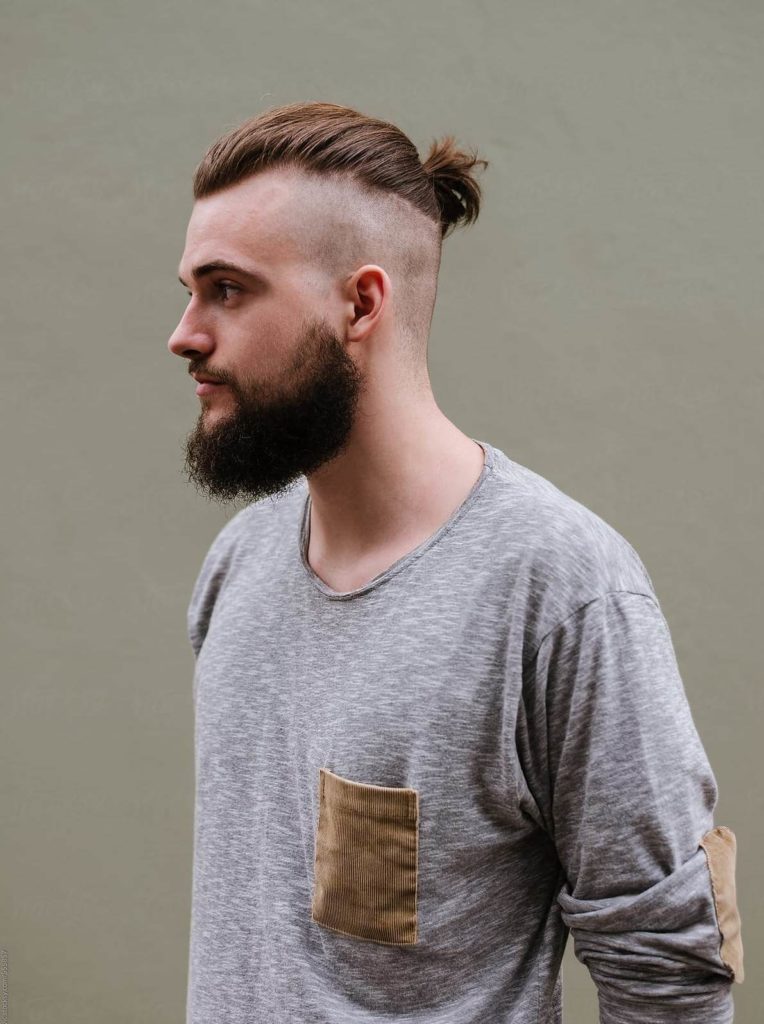 Like the style above, this style has a ponytail instead of a bun, and it’s very choppy and sharp so it adds some fierceness to the look. The top of the hair is long and the sides and back of the head are shaved to show off a bold, black tattoo design. 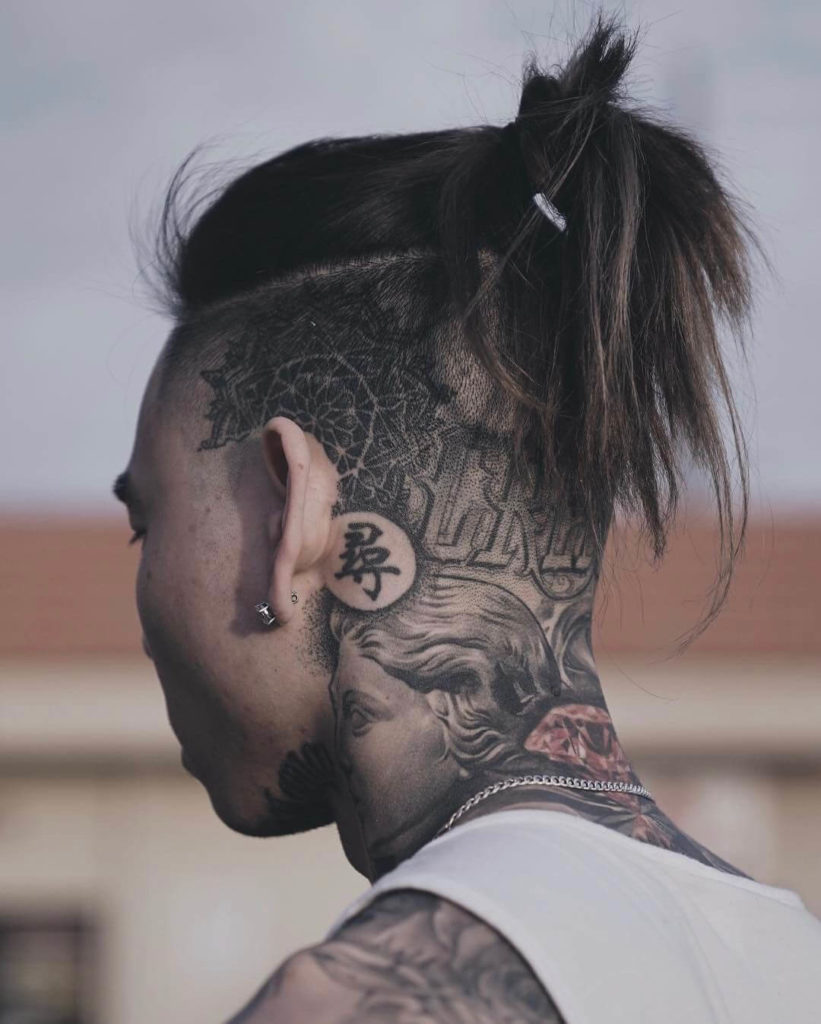 Half Down Samurai Look

This style has the top of the hair pulled into the classic Samurai bun shape, but the back of the hair is left long and flowing down the shoulders. The sides of the hair are much shorter than the top and back, so it’s technically an undercut look with a twist to it. 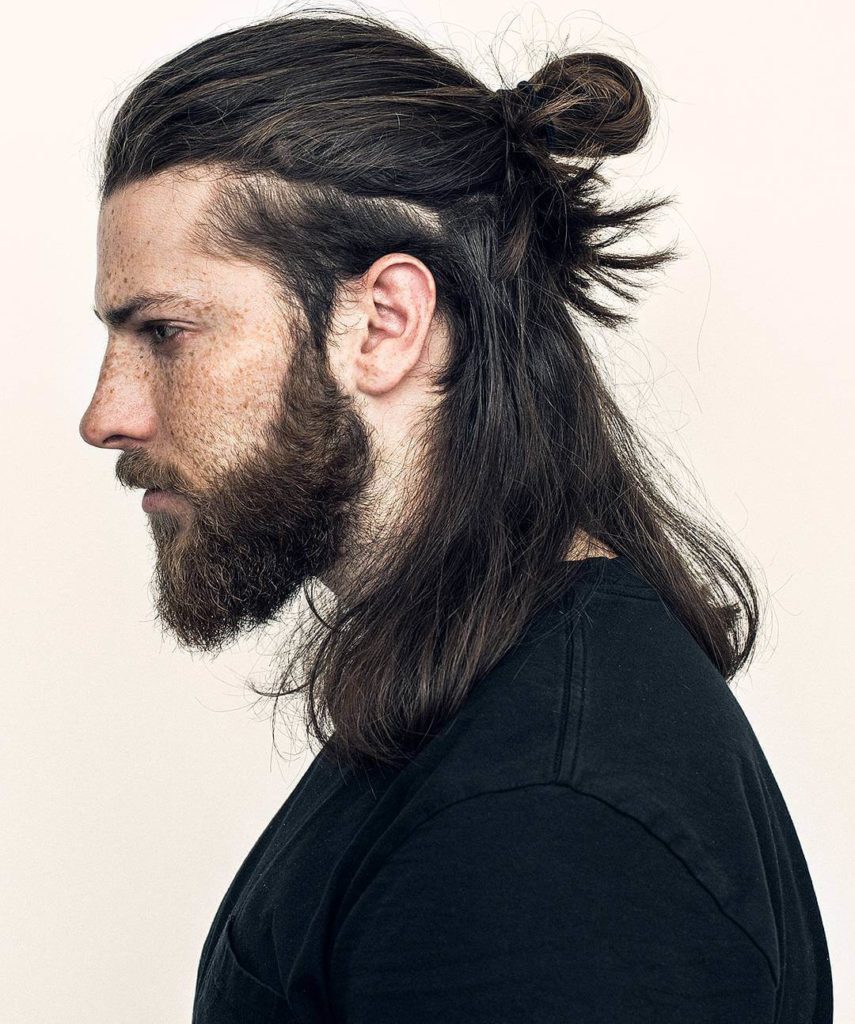 Curls are often difficult to deal with, and it’s much easier to deal with them if they’re pushed back and out of the face. Here, long dark curls are tied up into a perfectly neat, round bun in the typical Samurai placement, and there’s lots of texture to the hair. 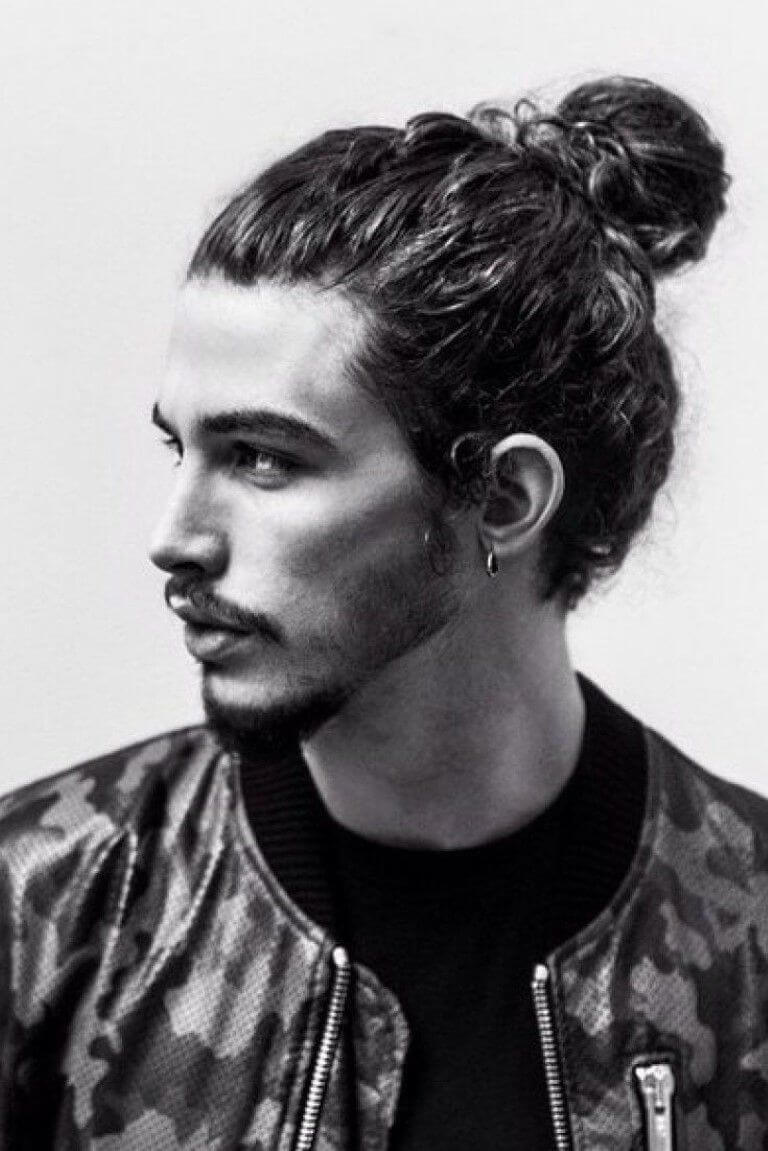 Faded styles are very popular, and this undercut style features a gradual skin fade on the sides. The top of the hair is very straight and sleek, and the bun is small and neat. You’ll need to be very careful to get every hair laid into place if you choose this style. 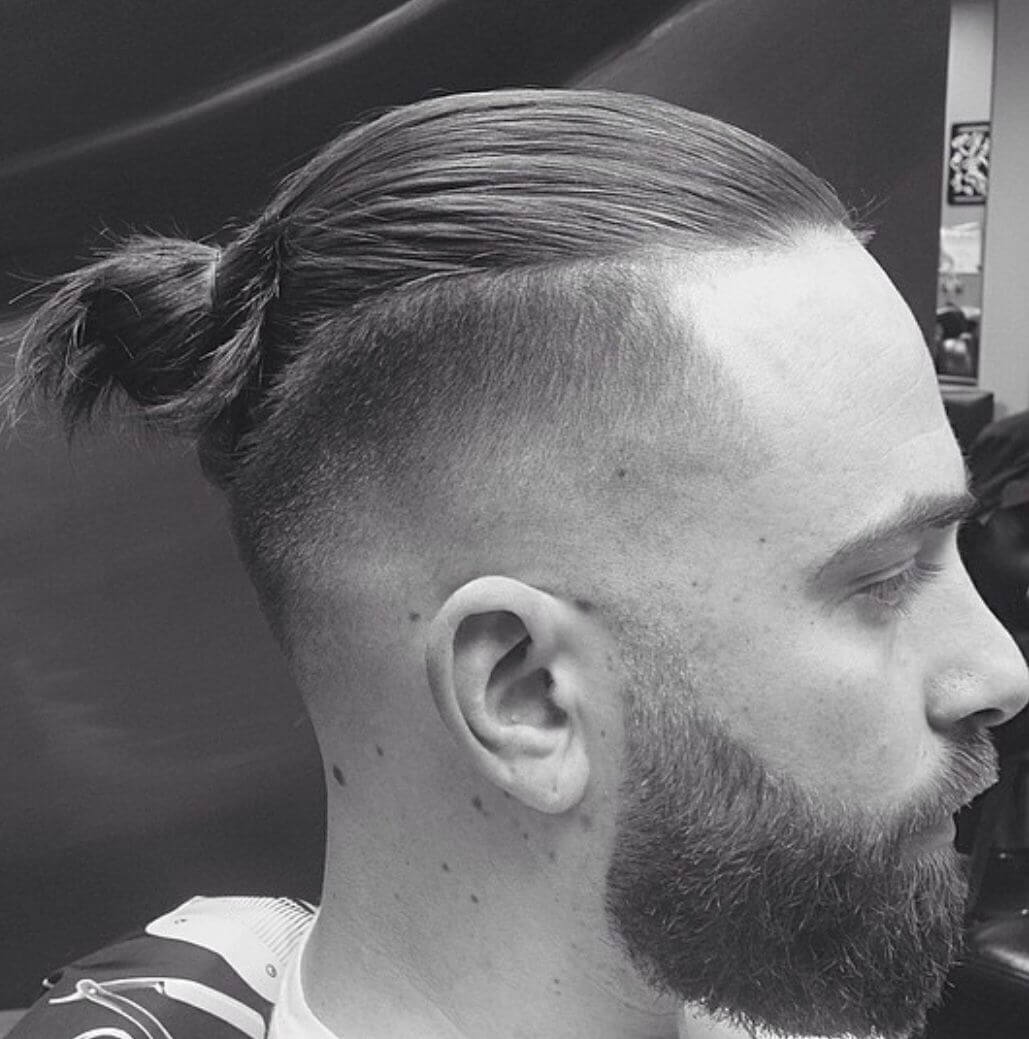 This is a style where the hair on the sides is left very fuzzy, but usually, Samurai styles are sleek. The typical sleekness can be seen here at the top of the hair, and there’s a slit shaved into the parting of the hair. The Samurai bun itself is secured up high and is very smooth. 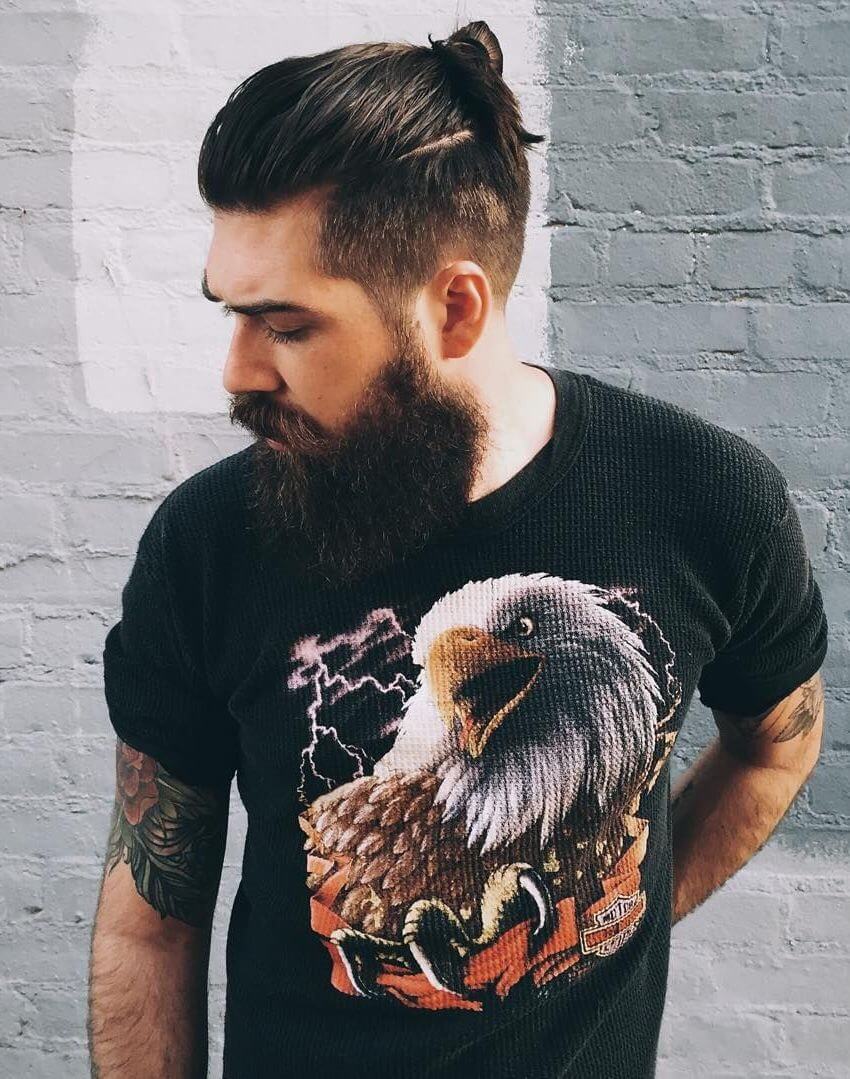 Lots of Samurai hairstyles are mid-length, but this is one for men with very, very long hair that’s an even length all around. The hair is pulled up loosely enough to leave some volume in the sides on top, and it’s placed into a messy bun where some of the wavy hair is allowed to fall free around the bun. 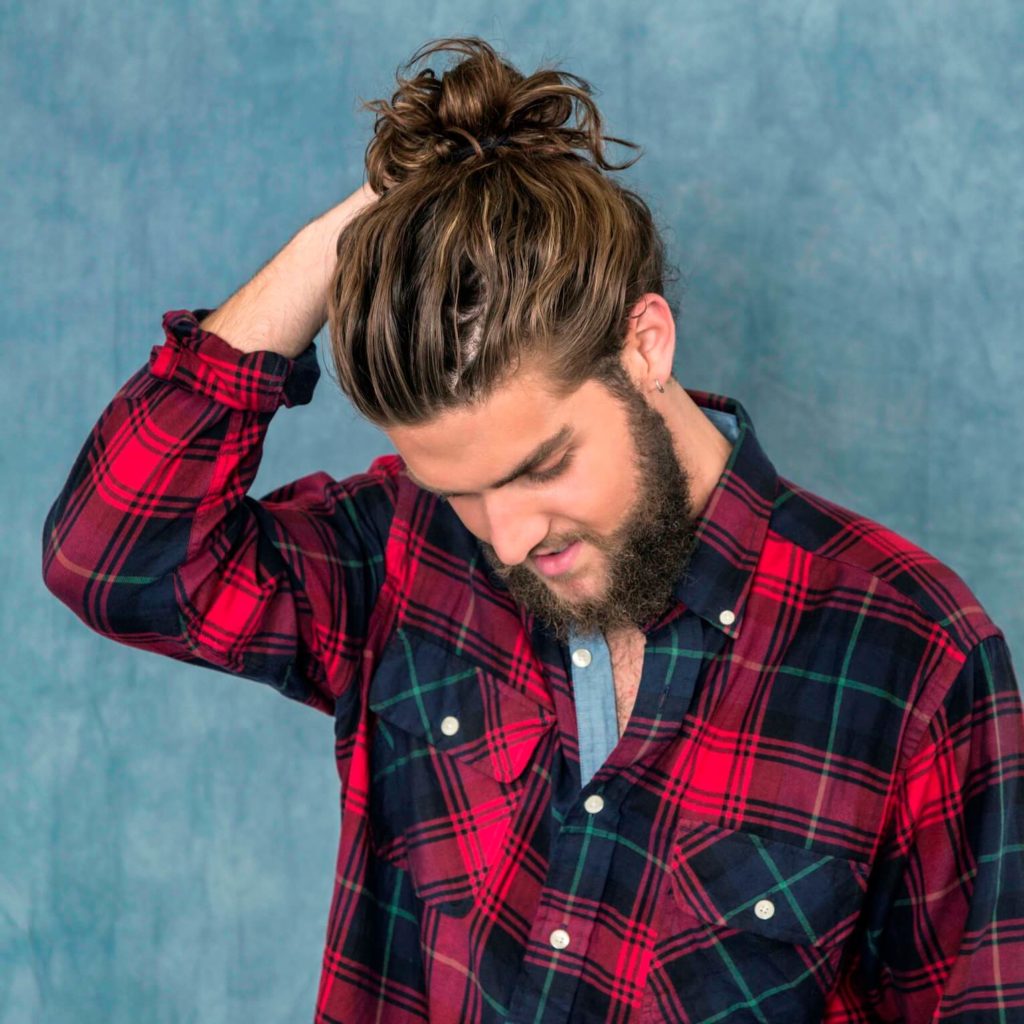 This low bun is placed much lower than a typical Samurai bun, and it sits right on top of some hair that’s left to hang down the back. It’s a look that’s great for semi-formal occasions while wearing a suit. 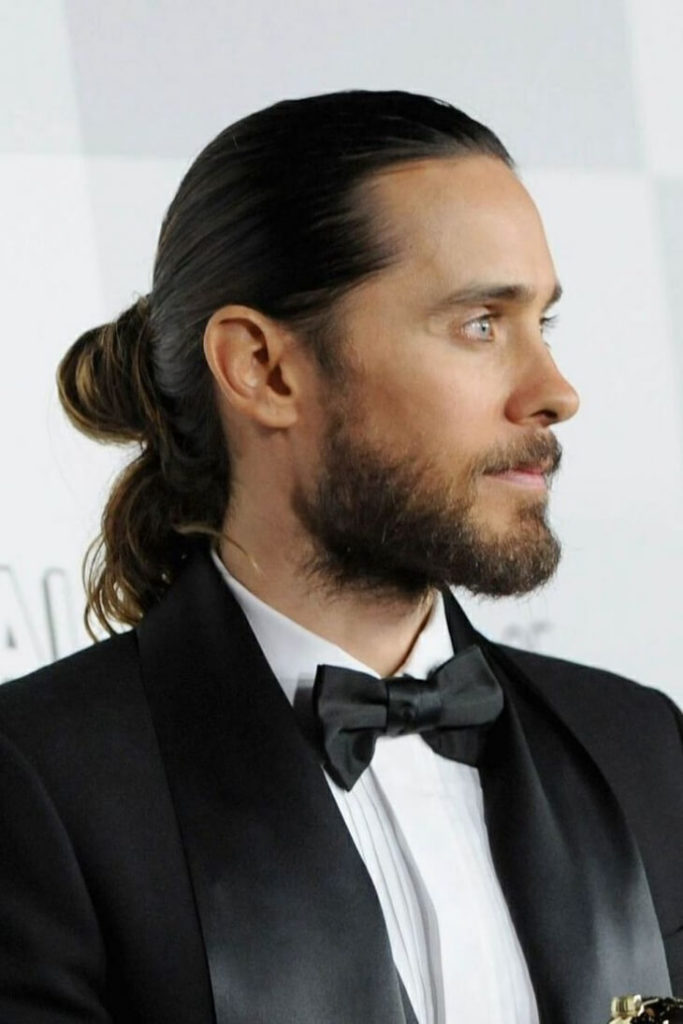 You don’t need long or even medium-length hair to have a Samurai style. This is the shortest style so far. However, it’s still slicked back into a Samurai style that has lots of texture and hair poking out of it. 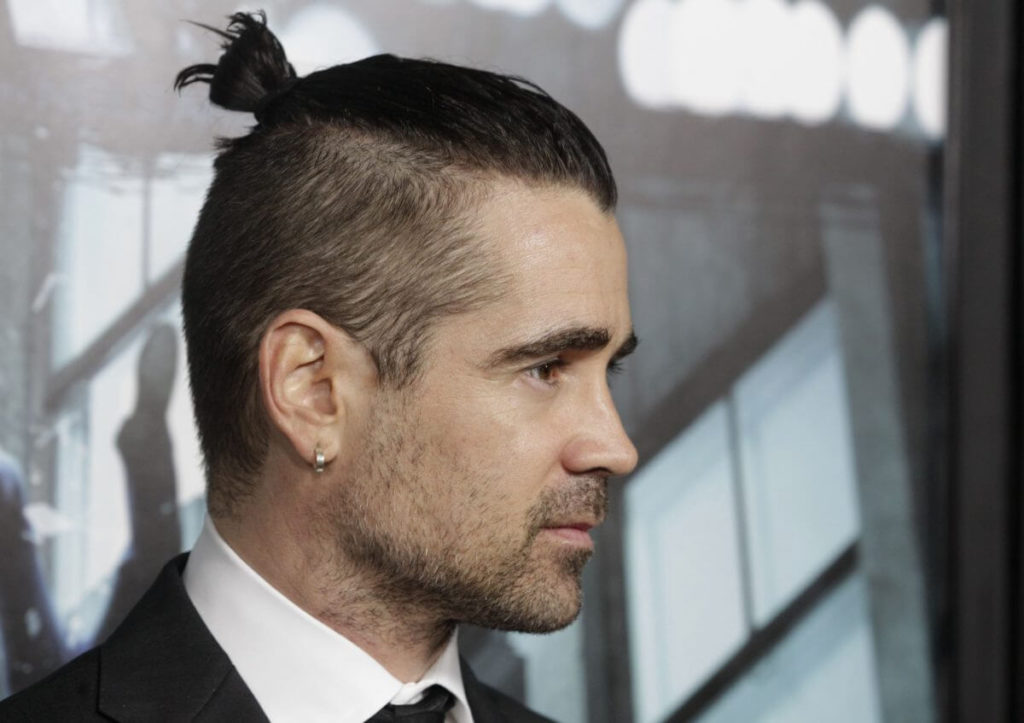 Even men with dreadlocks can get in on this hairstyle. The dreads are pulled back into a large bun on the top of the head, and some dreads protrude from the bun. 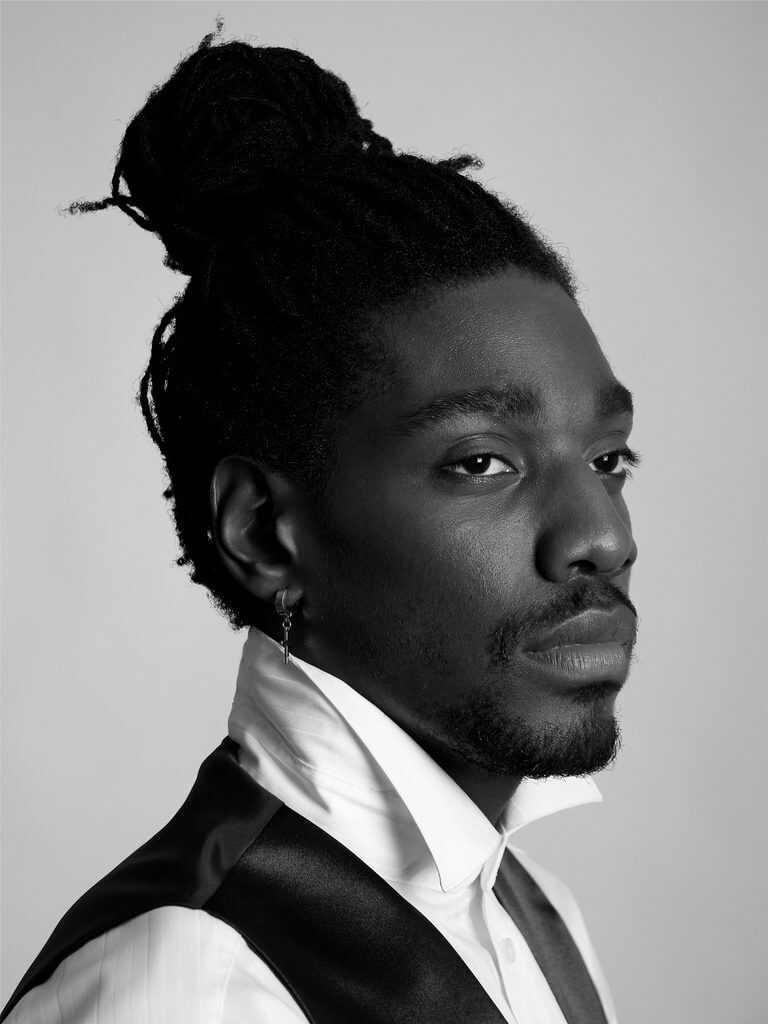 Samurai looks are often neat and sleek, but this one has messy, ruffled parts at the back of the head that make it a cooler, more casual style. Tie the bun up high and tight and leave the back a little looser to achieve this. 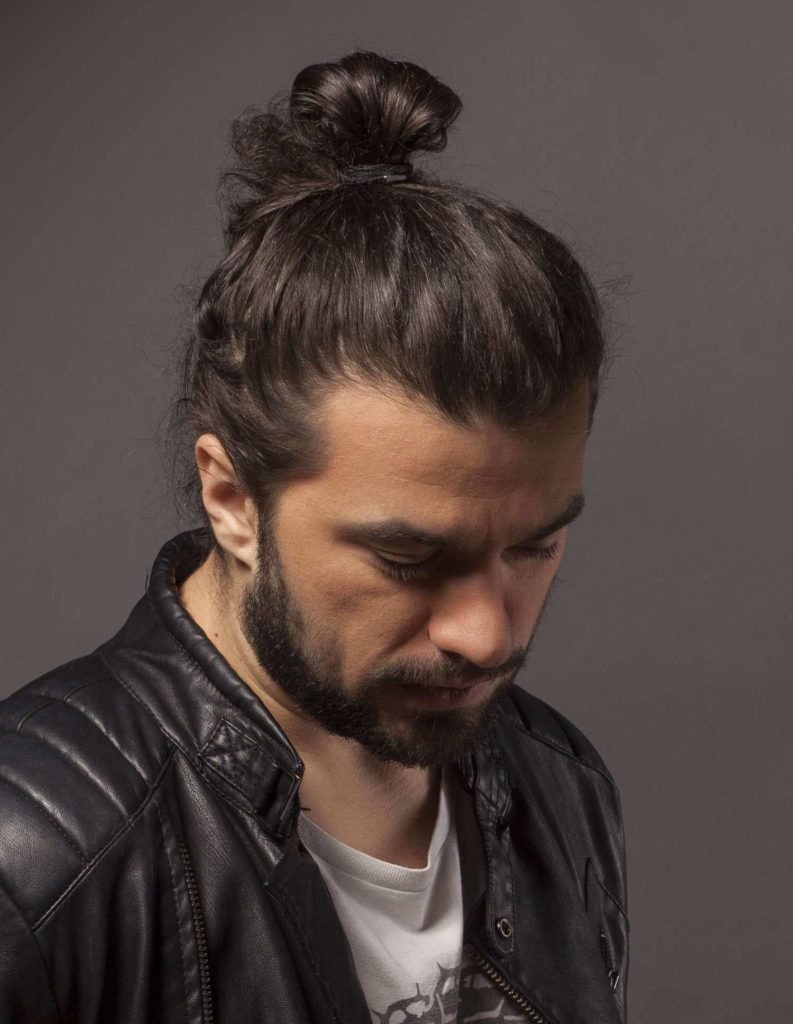 This Samurai bun is so small it’s almost hidden by the rest of the hair. The hair is in an undercut and the top of the hair is pulled back slickly into a small Samurai bun. 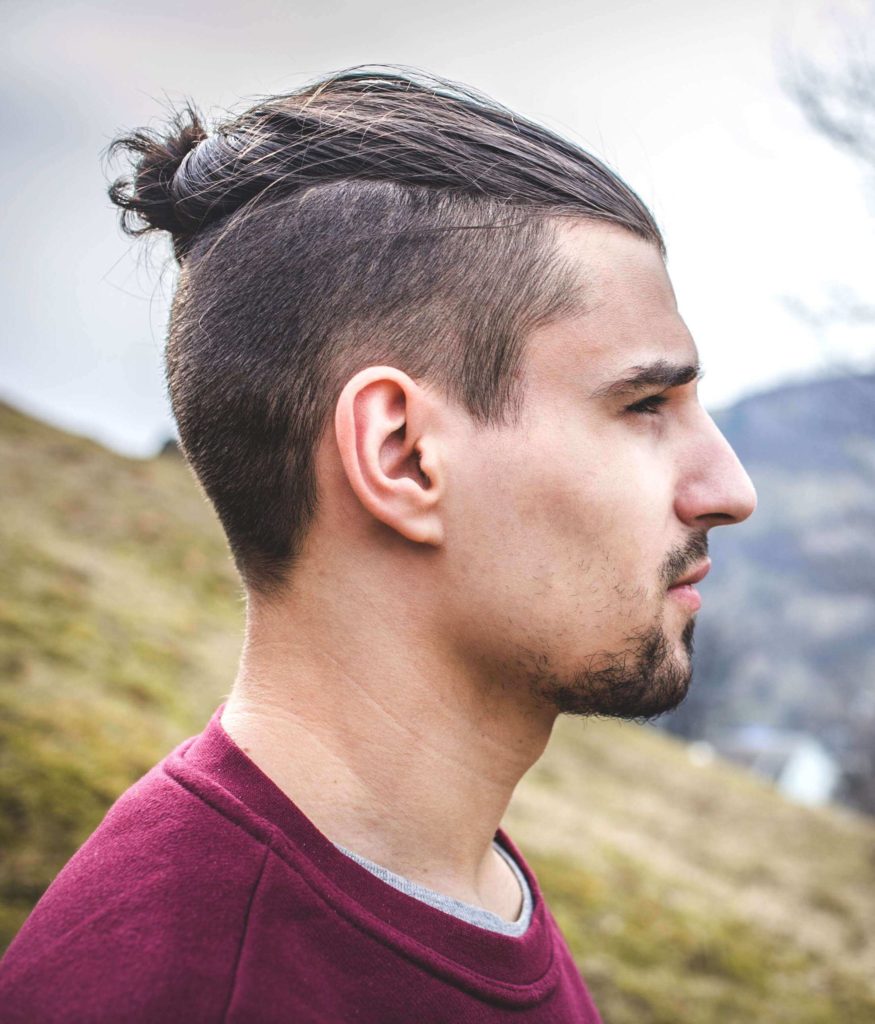